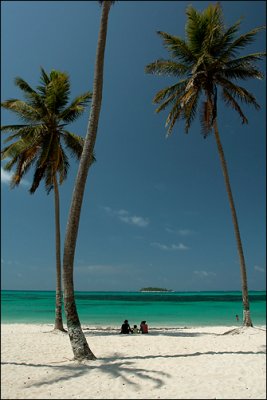 We had full intention of making our way to the Colombian Caribbean islands, however, our tickets were booked spur of the moment when we heard there was a seat sale. With E-ticket number in hand, we were booked to leave two days later for two weeks of tropical paradise. This was to be our vacation from our vacation. However, when we checked the weather forecast, it called for at least a week of rain/thunderstorms. Well, you can rest easy knowing that we experienced only one afternoon of rain during our entire two-week stay!

The flight into San Andres gave us the most incredible view of the island and the surrounding waters. The view looked like something from a yet-undiscovered planet out in some far-away galaxy. Never have we seen so many colours in one little stretch of ocean. It really was mind-blowing.

We flew first to San Andres and spoiled ourselves by checking into a semi-resort hotel. We still managed, somehow, to stay within our daily budget. Breakfast was included and it was… awful… until we discovered the local “milk soup” option on the menu (changua). It’s a hot soup of milk and water with potatoes, two eggs dropped in whole to poach, and lots of cilantro. It was delicious and we looked forward to eating that every morning.

Life was good in the islands. We slept well in air-con rooms with comfy beds, happily woke up for breakfast, and enjoyed the beach and HOT ocean water. We also took the local bus into town to get groceries and eat dinner (one of the ways we managed to stay on budget). One morning, after booking our flights to the neighbouring island of Providencia, we even rented a moped. The “renter” decided Jorge wasn’t comfortable enough driving the moped and after K proved herself, she became the official driver (no license or helmet required!). We had the moped for the day and we took it around the island (17kms), stopping off at lovely local beaches, and trying to find ourselves shade whenever possible.

(We would love to say that these islands came without pesky thieves, but it was not the case. In fact, we were followed by two young guys on two different days!?)

We were really looking forward to Providencia after being told often that it was even more beautiful and relaxing than San Andres. Unfortunately, this was not the case. Not even close. However, we still had an incredible time. We decided to stay at a hostel in the “centre” (population of the island: 5,500) which came at a reasonable price WITH air-con and then we rented a moped for the week. The routine that developed included waking up in the morning, walking 3 minutes to the mediocre bakery for breakfast, returning to the hostel to lather ourselves with suntan lotion, riding the moped to our favourite – practically deserted – beach, bumming it for a couple hours, eating our packed lunch on the beach, riding our moped back home, showering, relaxing, having dinner across the street at a cheap local eatery, watching CABLE TV, and going to sleep. Yep, it was pretty much paradise lived.

(Yes, we are back... but it just wouldn't be right to leave this unfinished)

You leave one dangerous South American city only to arrive in another dangerous South American city. Before all of you start thinking: “Well no duh! It’s COLOMBIA”, let us set the record straight. Colombia was no more dangerous than any other place we’ve been in South America. In fact, we would say that Bogota was relatively safe until you stepped foot in the old part of town… at night. Following our guide book, we ended up at a hostel in the old part of town. And since we were only staying three nights, we didn’t feel like finding another place to stay when we found out just how dangerous the location was (some backpacker guests had recently been mugged, at knifepoint, just outside the door of the hostel). The truth is, the dangerous location wasn’t the main reason we wish we had changed location. Rather, it was the ridiculous level of CONSTANT noise that the LOSERS (read immature backpacker youth that come to South America to party all night while drinking and drugging themselves into stupidity) staying at this hostel were making. Blaring music and T.V. only complemented the faux-politically-correct American “hippy” couple who decided to loudly vocalize there sex-capades for the whole hostel - two times in the night and two times in the morning. By far, this was the worst hostel (Hostel Sue) we have stayed at during our almost four months of traveling. Angry? Bitter? Noooo!?

Bogota also had us suffering of altitude sickness. At 2600m above sea level, our tummies felt like inflated balloons and K had headaches. The altitude also meant that this city was only slightly warm during the day and quite cold at night. As you can "expect", the hostels had no heat and the beds were cold and damp to sleep in.

Bogota seemed like an interesting city and we could immediately tell that we would like Colombia. The food was decent, the women were beautiful, and the city was lovely. We enjoyed seeing the old part of town and its colonial architecture, however, three nights of very little sleep put us in a bad mood. That mood was only made better by our discovery of the Juan Valdez café (a chain of cafes in Colombia). Finally, great coffee in South America (some of the best coffee comes from this part of the world, but most of it is being exported to North America). We found our favourite drink here: Tinto Cardamomo (regular coffee with crushed cardamom added to it) with condensed milk (cream does not exist as an option!?). Mmmm…. Heaven. We miss you Juancito.